The Eco Committee of 2021/22 are working to educate pupils at St Gregory’s how to reduce their food waste.  They compiled a short video showing fellow pupils how to dispose of their rubbish in the canteen; encouraging them not to waste food and they included a few top tips to help reduce food waste at home too.

Throughout the summer term, Gardening Club is running after school for Y7 pupils on a Tuesday and Y8 pupils on a Wednesday.

We have planted tomatoes in our greenhouses; taken cuttings of mint; planted out runner beans, sweet corn, peas, lettuces, carrots and radishes in the garden as well as doing lots of weeding, watering, pond maintenance and feeding the birds.

We have been busy potting on tomato plants, Zinnias, Cosmos and Dahlias for our plant sales, which we held in May and from which we raised over £300 towards our school Crisis Fund/Food Bank.

Our most recent task was to put straw under our developing strawberries so that we get to eat them before the slugs and bugs do! 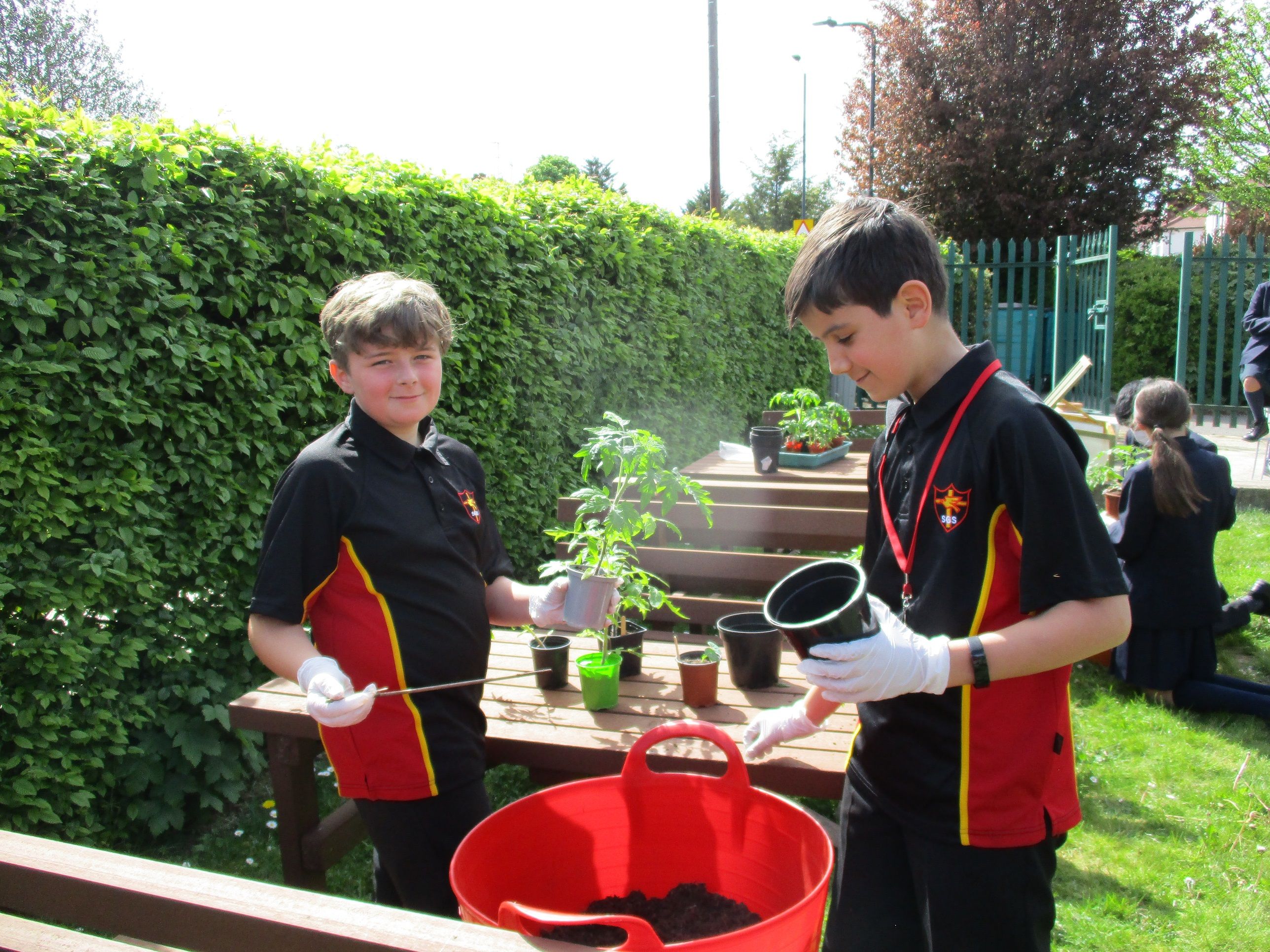 In support of national Mental Health Awareness week (10th to 16th May), pupils took part in a variety of lessons and initiatives reflecting on the theme, “Connect to Nature.”

The Geography and Science Departments used the Eco Garden throughout the week across a range of year groups.  In Geography the pupils drew field sketches and in Biology pupils were encouraged to make Biological drawings of the plants and nature in the garden.

We also asked pupils to submit entries for our competition. Using a variety of media options, pupils were asked to demonstrate how being in nature or connecting with nature helps to benefit their mental health and wellbeing.  The winner of the competition was Kyra Anigbogu, 10A, who wrote a beautiful poem. 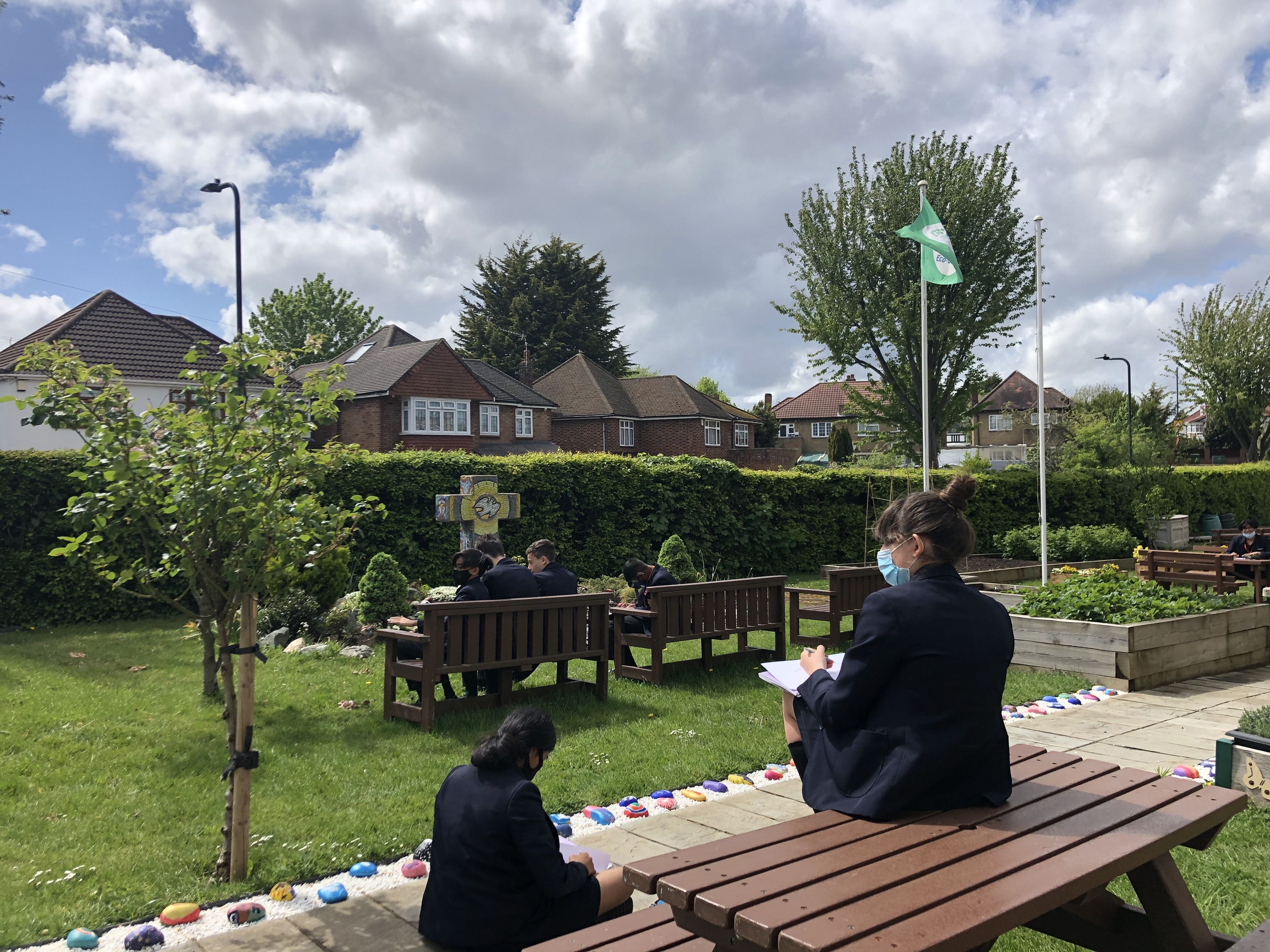 On 27th April and 9th June, the Y9 Eco Committee completed an hour’s litter picking along the pavements of Woodcock Hill, down to Kenton Road, and then in Woodcock Park.  They collected 8 sacks of rubbish in just one hour from their first litter pick and 6 sacks from their second trip! 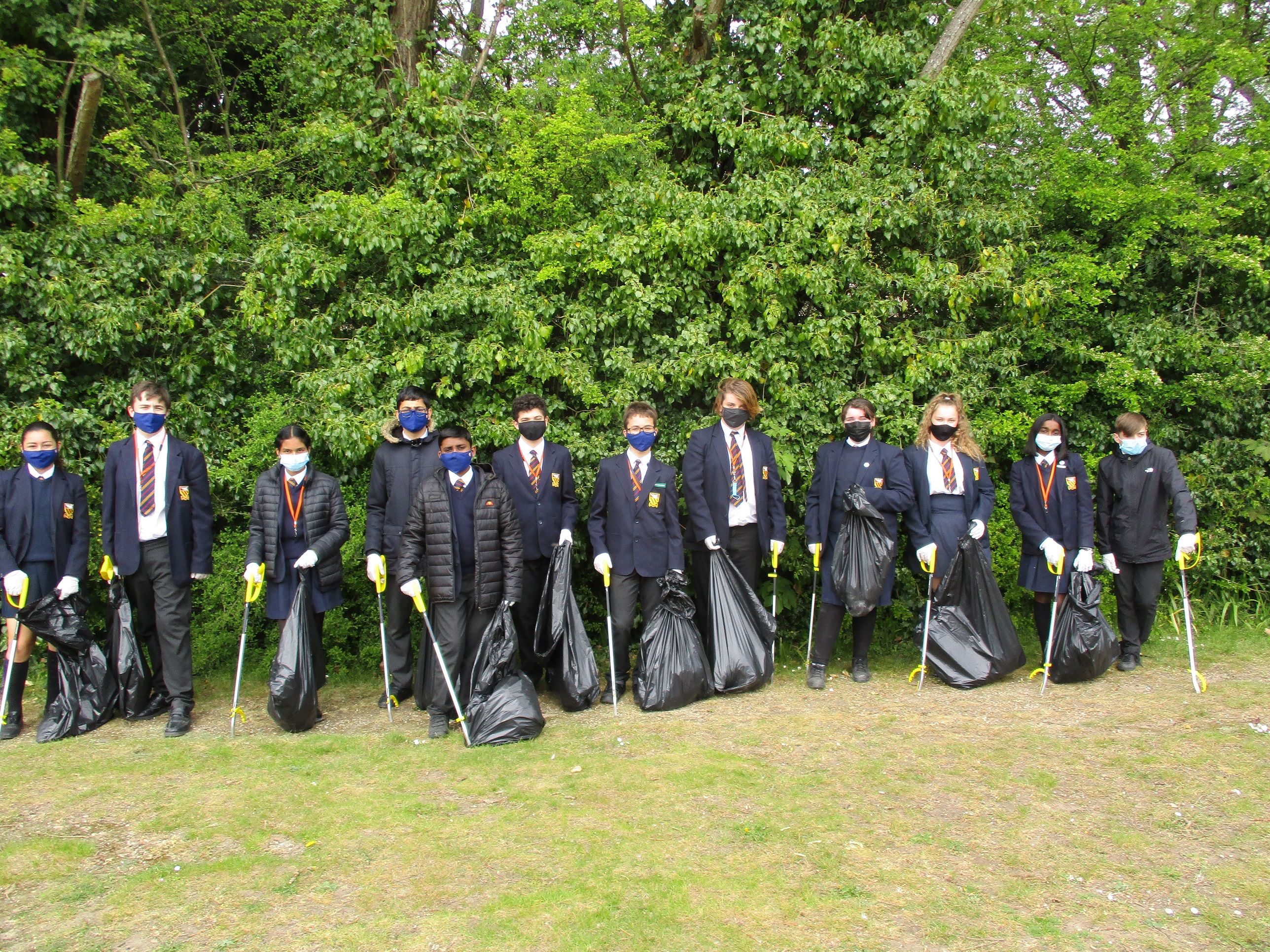 Working alongside The Rotary Club of Northwick Park, St Gregory’s pupils have been raising awareness and raising money for The Rotary Club’s Purple4Polio campaign.

St Gregory’s Y7 pupils planted 4000 crocus corms, donated by The Rotary Club of Northwick Park, on a sloping bank of grass in the school grounds overlooking Woodcock Park.  The purple crocuses will bloom in spring and will be seen by everyone visiting Woodcock Park.

The Rotary Club also donated a teddy to the school, which the Y9 Eco Committee has raffled to pupils, raising over £200 for the Rotary’s Polio Immunisation campaign. 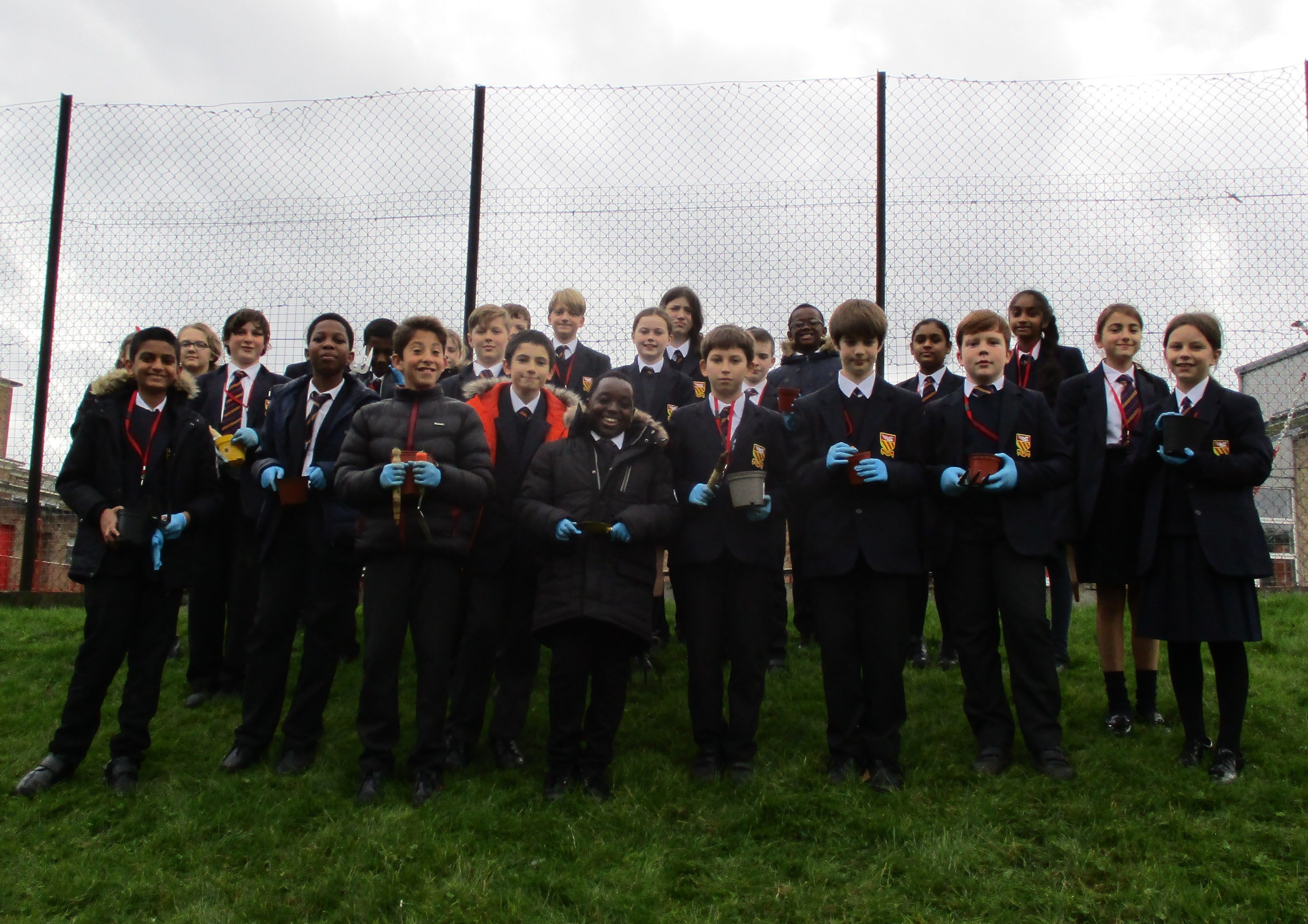 During the week leading up to Remembrance Day this year, pupils from St Gregory’s Catholic Science College placed over 550 commemorative crosses in the school’s Prayer Garden.

Every pupil in years 7, 8 and 9 made a small wooden cross and poppy in their Design Technology lesson.  In their Art lesson, they painted their cross and poppy and in their RE lesson, they wrote a prayer of remembrance and thanksgiving for a soldier they had either researched or who had been a member of their family. The prayer and the name of each pupil’s chosen soldier were engraved onto the crosses made by pupils.

The crosses were placed in the school's garden in a regimented format, resembling that of a war cemetery.  Pupils and staff gathered around the crosses for an assembly to mark Remembrance Day, where pupils offered prayers of thanks to those who gave their lives in the Great War and all subsequent conflicts.

The theme of Remembrance Day was incorporated into lessons across the whole school curriculum.  As well as lessons on WW1 trench warfare in History classes, pupils learnt about the impact of conflict on Population Pyramids in Geography; they calculated ratios and percentages of the number of people who died in conflict during Maths lessons; they performed the “Last Post” in Music lessons; studied parts of a poppy flower in Science; learnt the vocabulary of war in French lessons and analysed war poetry in English. 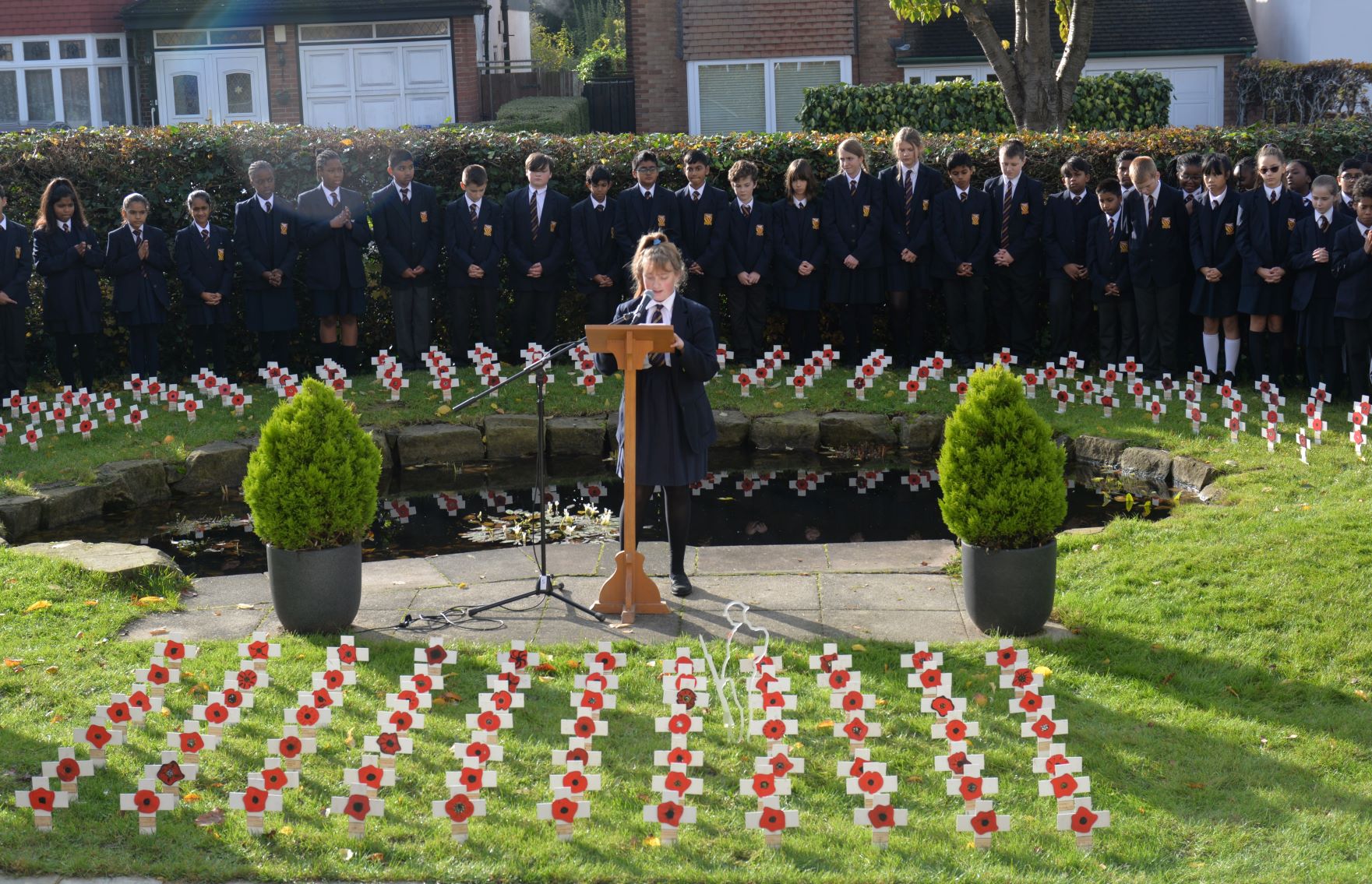 We stayed after school to make leek and potato soup with Mr Cullen, our cookery teacher.  We were very happy to help as the soup was then taken to a soup kitchen in Ealing by our Sixth Formers and staff, who served it to homeless people. Apparently it went down really well.  It certainly smelt delicious. 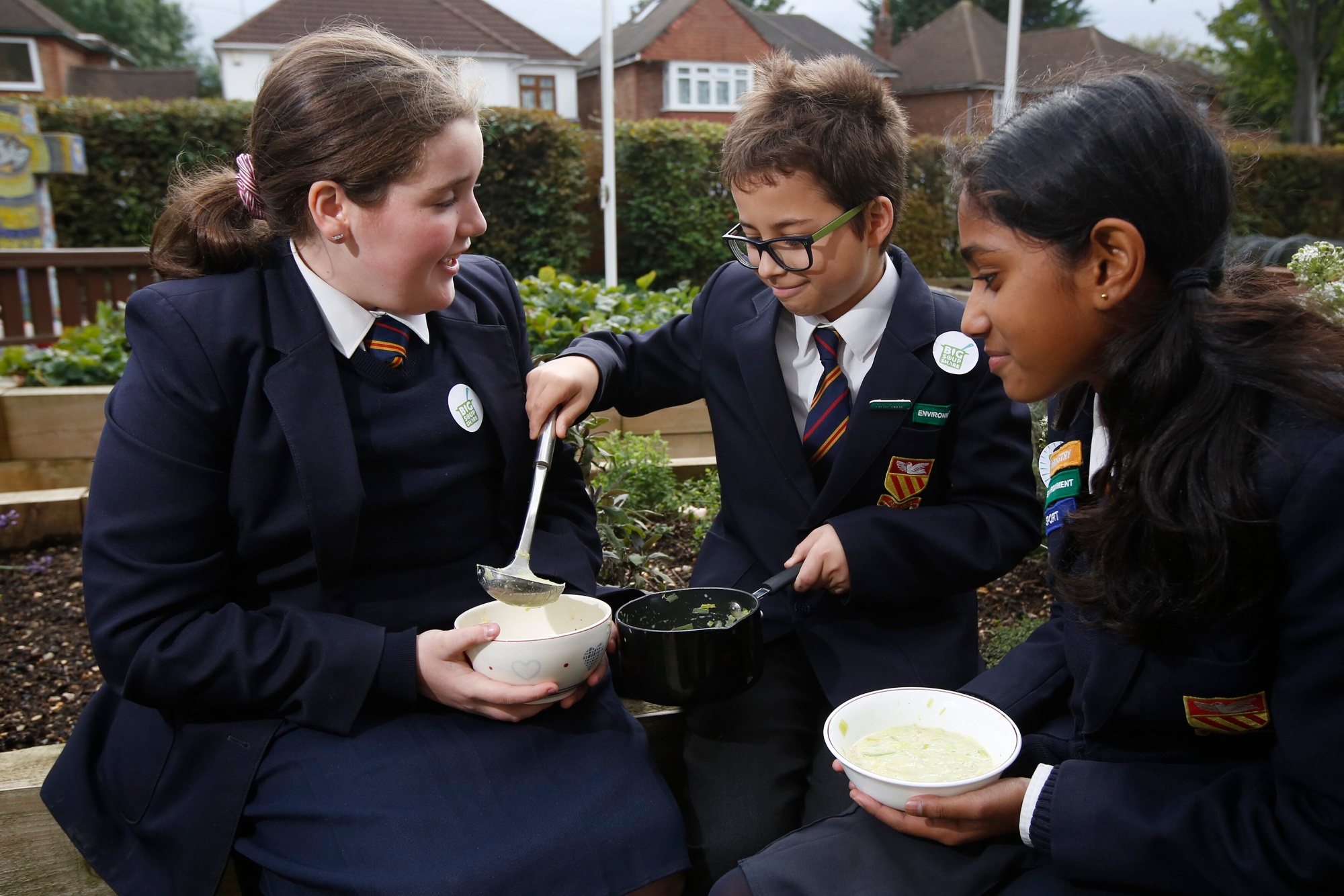 Pupils fly flag for the environment

Eco Schools Assessor, Francesca Busca, recently visited the school and commented, “It was a real pleasure, if not a source of inspiration, to visit this school.  Not only are they doing an outstanding job at fulfilling their eco goals, but they also put an excellent structure in place whereby they seem to integrate them efficiently and consistently throughout all aspects of school life, on a regular basis. It is heart-warming to see how the enthusiasm, involvement and commitment of both pupils and staff seem to have triggered environmental awareness and practices exponentially, reaching way beyond the school grounds.” 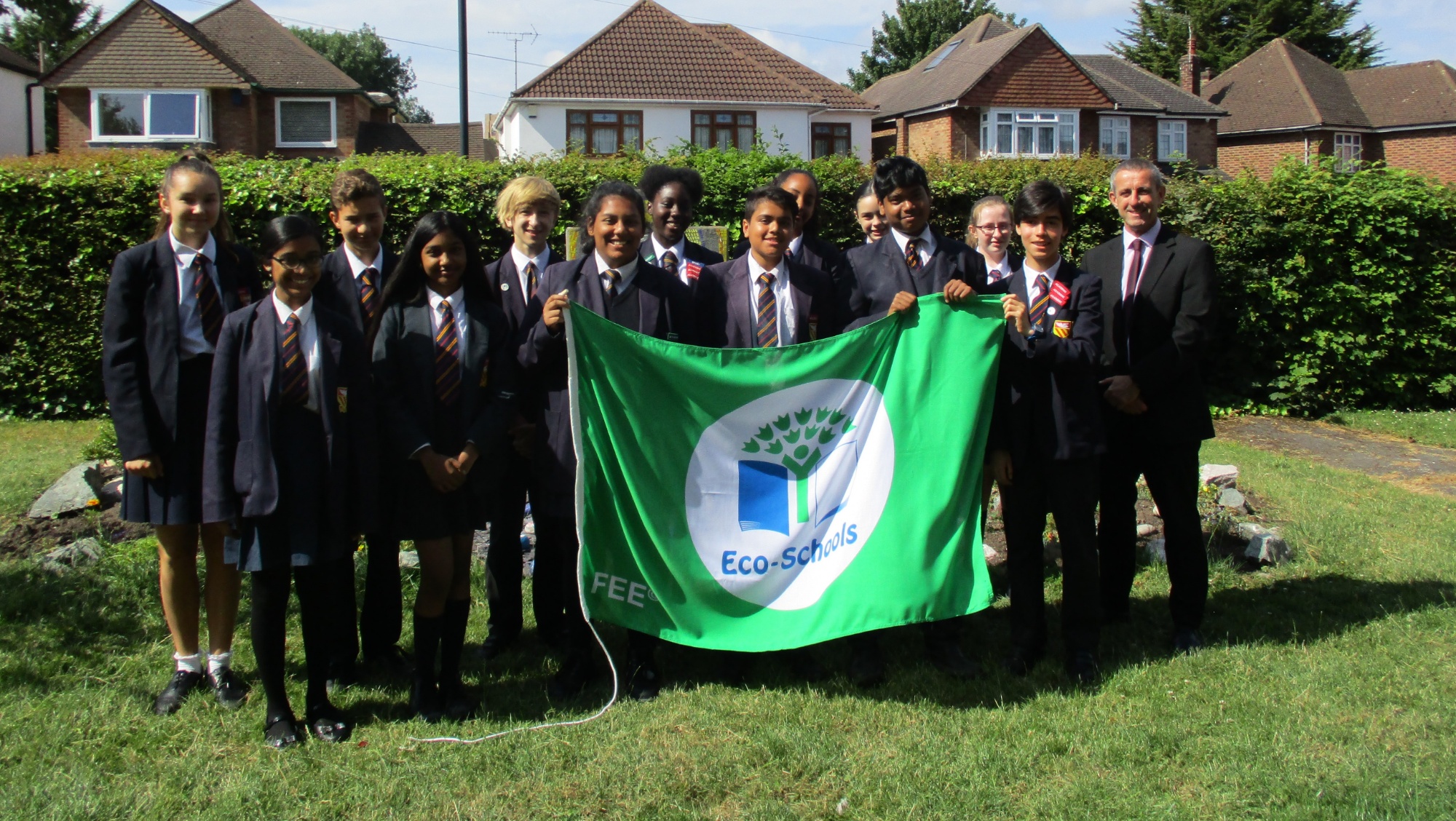 Pupils and staff throughout the school have been pledging to reduce their use of single use plastics.  The Geography Department has created a wall in Miss Lueiro’s classroom onto which pupils and staff can stick their pledge. 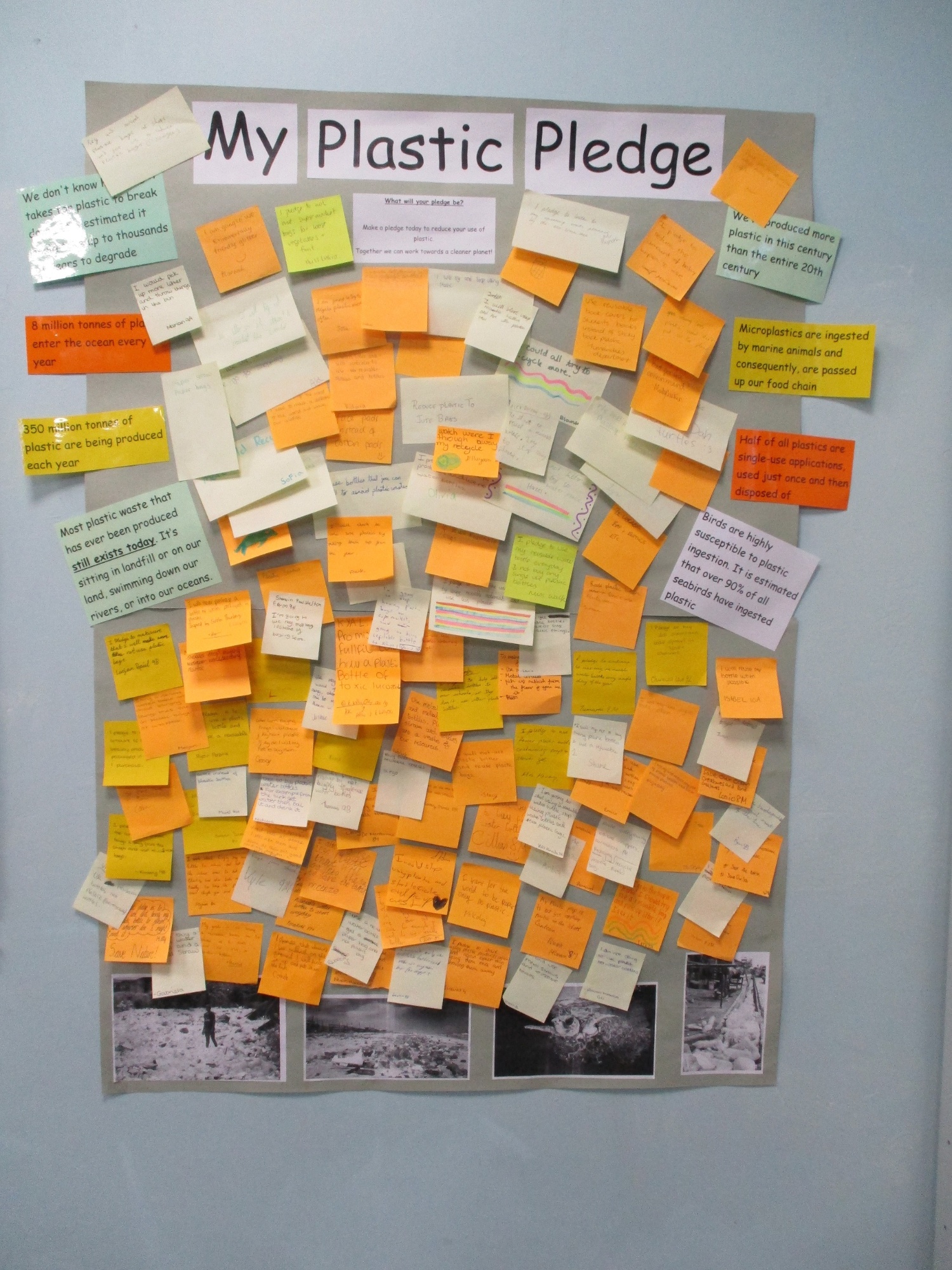 Pupils were bowled over by the support they received.  Over 90 people turned out to support the park clean up, with 46 bags of rubbish collected in just under one hour.

St Gregory’s pupils carried on their clean-up throughout the day with Year 7 pupils collecting items for recycling in the school playground at lunch time and 6th Form pupils litter picking in the afternoon. 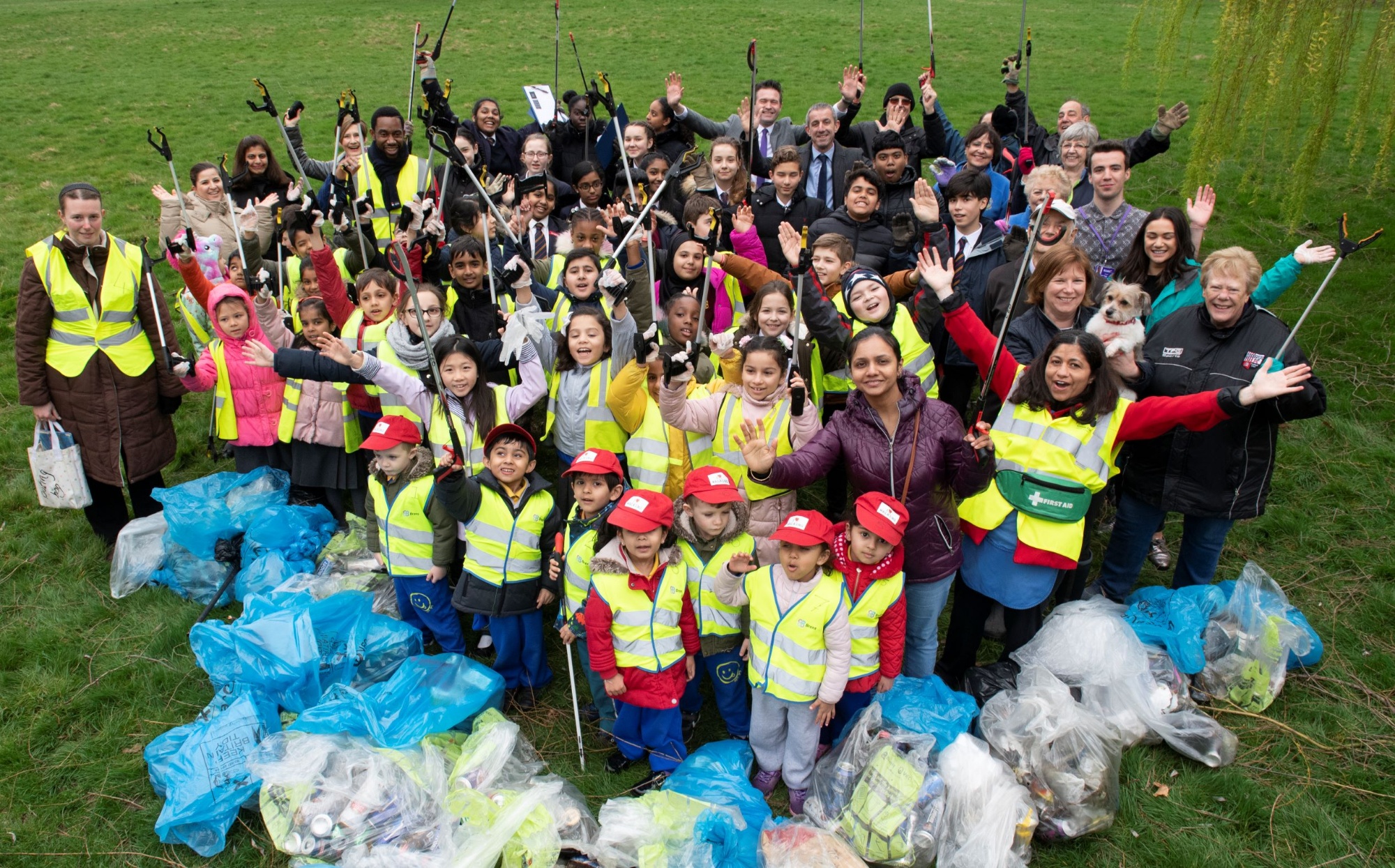 On 13th March a group of Y8 pupils visited the RHS flagship garden in Wisley, Surrey to learn all about Science in Horticulture.  They identified different types of slugs and their various body parts; inspected the intricacies of insects through microscopes under the guidance of Wisley’s Head Entomologist; learnt how to catalogue and identify plants as well as exploring the vast glass house filled with tropical and desert plants. 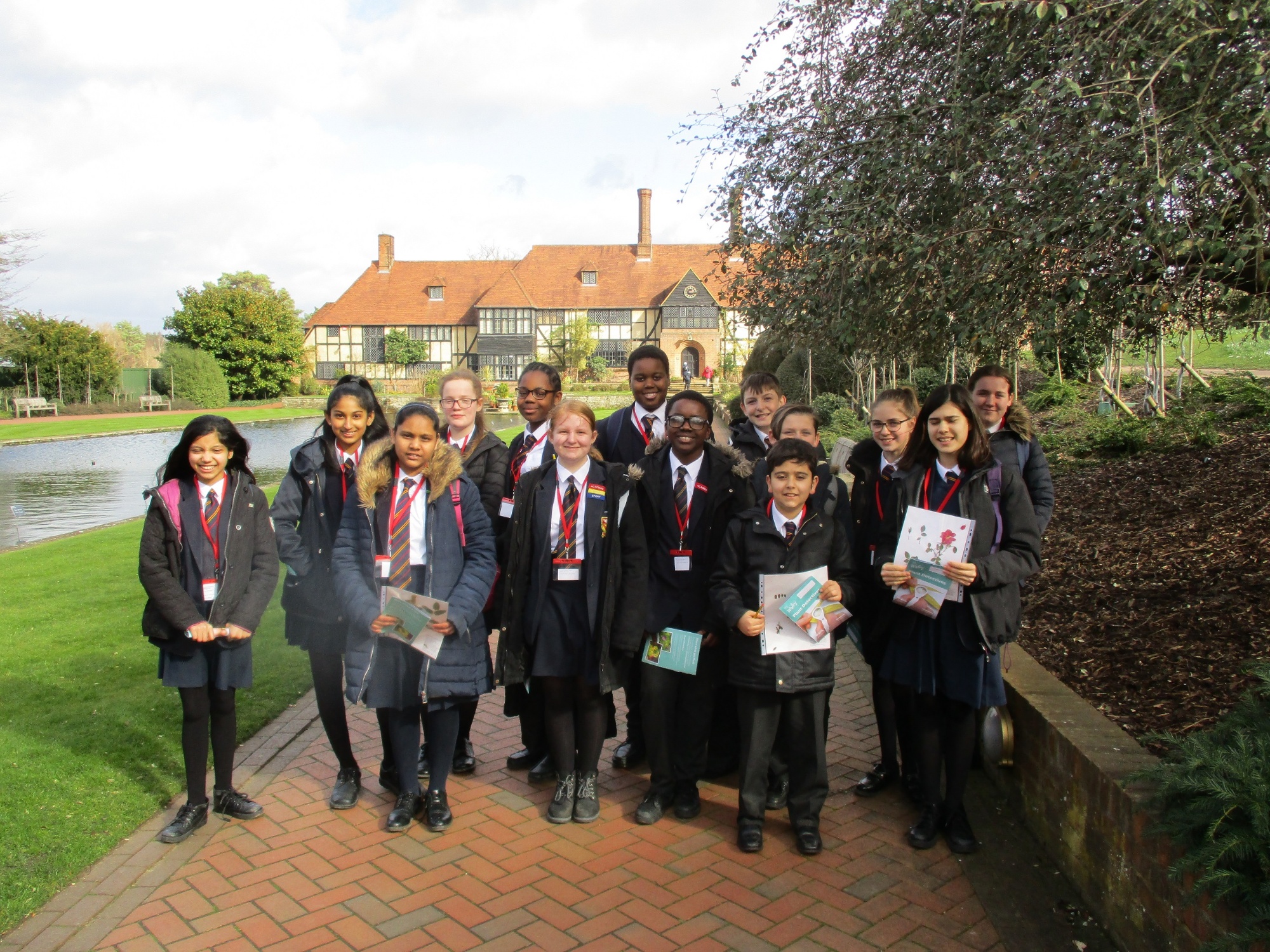 A recent project undertaken with MP Smarter Travel and Brent Council, to monitor air quality in and around schools, shows that St Gregory’s is one of the least polluted schools in Brent.

Pupils from 7H placed diffuser tubes at three main school entrances – inside and out – to capture air quality over four weeks from 16th January to 12th February.  Results showed that air quality in all locations was within the legal limit and better than the majority of schools in Brent. 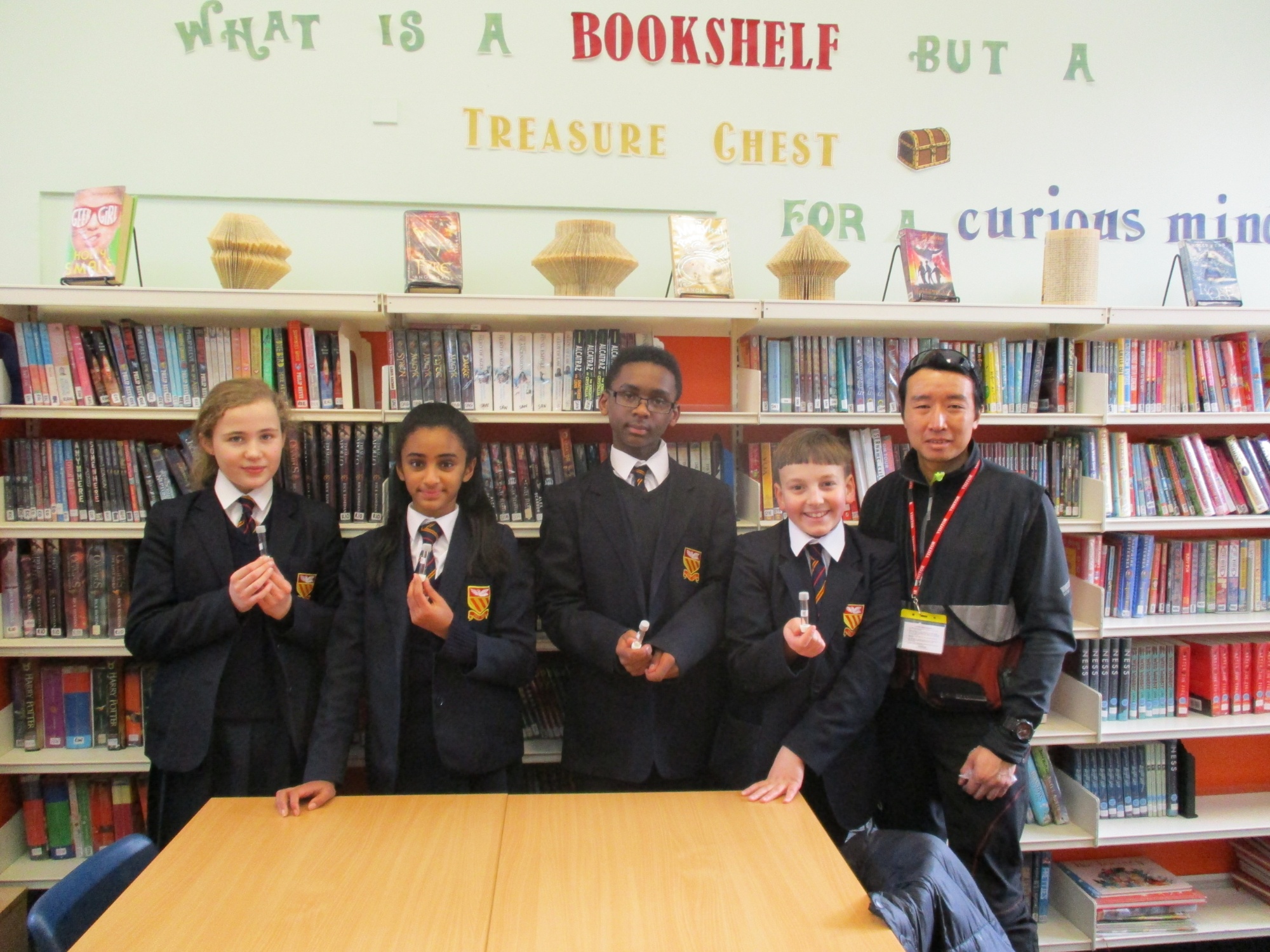 Upcycled Christmas decoration in the Library

Miss Sen and her team of pupil librarians have made a fantastic Christmas display in the school Library using upcycled materials.  The Christmas tree was created out of toilet roll tubes wrapped in foil and glued together.  The snowman was made out of old tin-foil and bubble wrap.  The snowman’s head was made from used newspaper, scrunched up and covered in foil.  Well done to our young Librarians and to Miss Sen for her inspirational ideas. 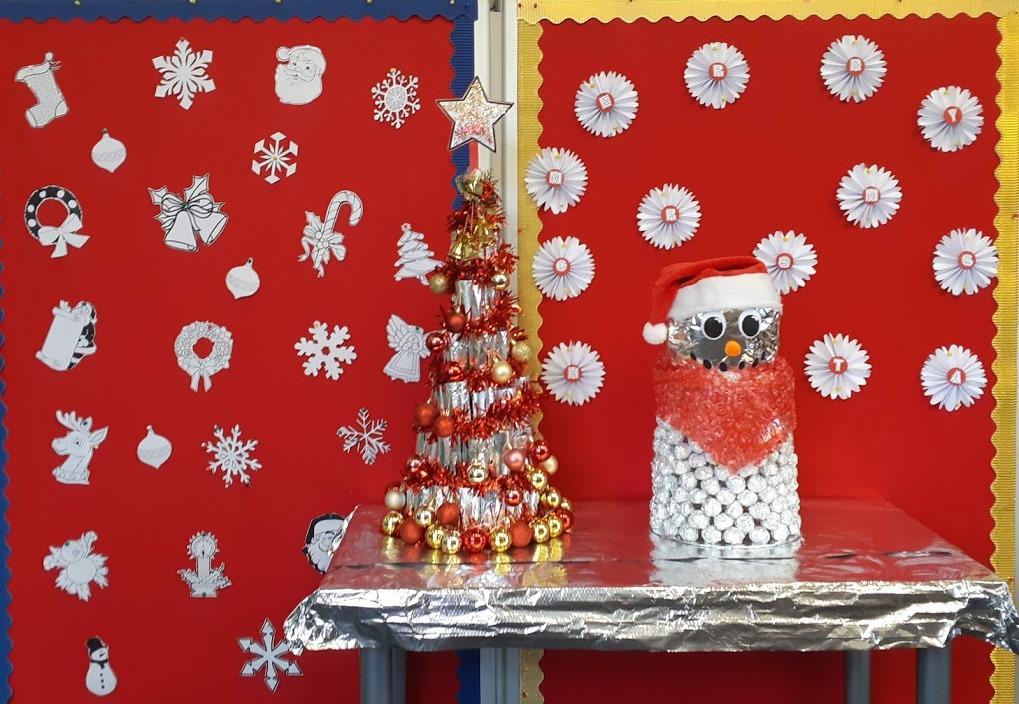 Frances Tophill, BBC Gardeners’ World presenter and judge for the RHS’s Campaign for School Gardening, paid a visit to St Gregory’s on 9th November to congratulate pupils on their success on winning the RHS School Gardening Team of the Year Competition.

Part of the prize for winning this competition was a brand new greenhouse, manufactured and donated by Gabriel Ash.  The new greenhouse was installed during the half term holidays and Frances gave pupils lots of ideas about how to get the most out of this wonderful new growing space.

Earlier this year, Mary Wood, a long-serving and very popular Science Teacher at St Gregory’s passed away, shortly after her retirement.  Frances Tophill was invited to help pupils plant a rose in the Eco Garden in memory of Mary Wood.  Mary’s husband, Bob Stonehouse, was in attendance; pupils and staff prayed for Mary and blessed the rose with Holy Water.  The rose chosen to commemorate Mary’s life with St Gregory’s is a standard variety, with pink blooms and is called “Mary Rose”.

In addition, Frances worked with Gardening Club pupils from years 7 & 8 to plant a raised bed outside the greenhouse with different varieties of Mint.  Pupils can’t wait for the plants to flourish so they can pick chocolate, apple, pineapple and strawberry-flavoured mint leaves.

At the end of her afternoon with our pupils, Frances commented that she was most impressed by their gardening knowledge and enthusiasm.  She was also full of praise for the “wonderful” and “amazing” Eco Garden and the pupils’ ownership of the space. 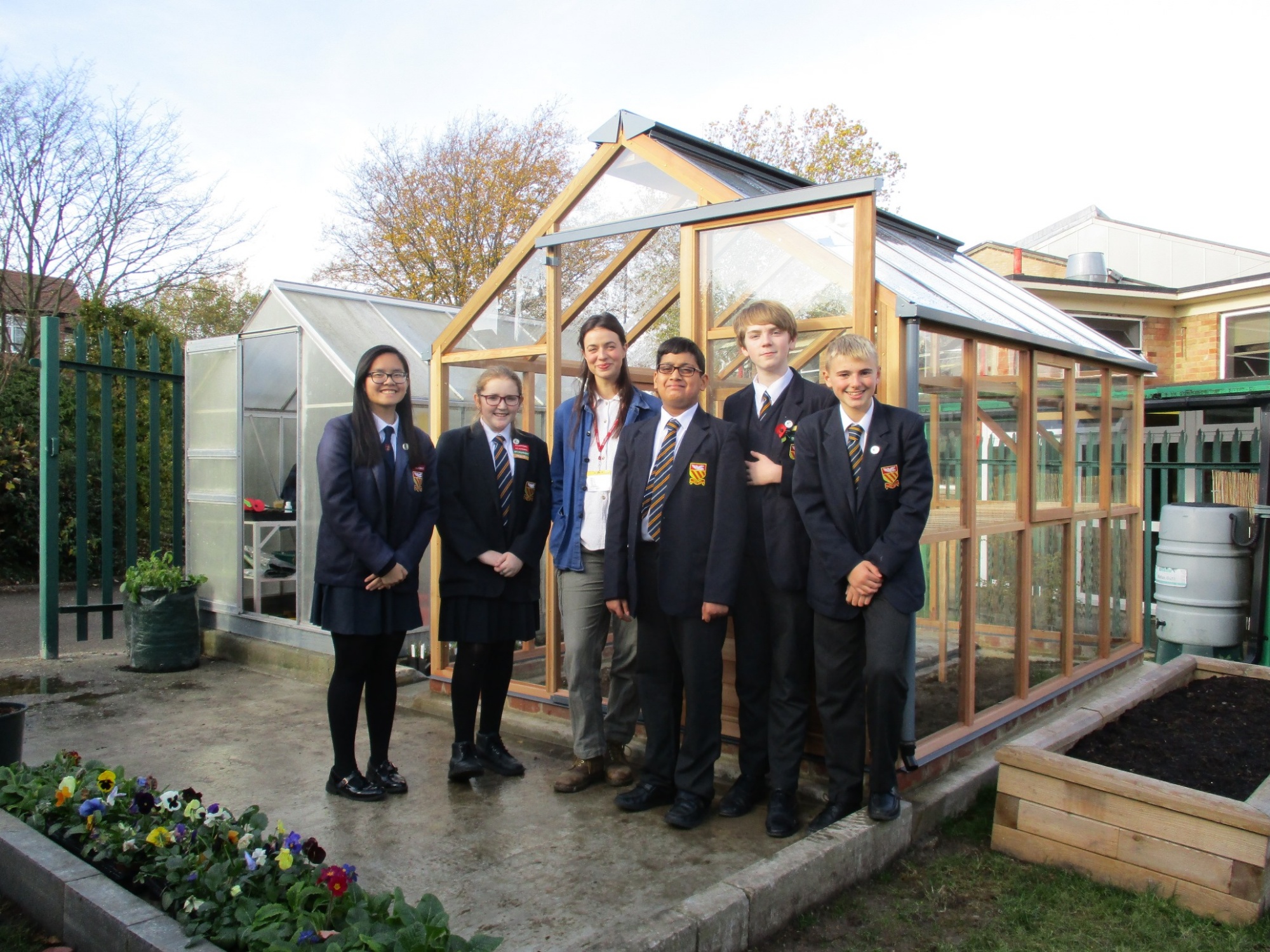 Pupils met up with staff from Veolia, the company which manages Brent’s parks, who supplied the daffodil bulbs. Staff helped the youngest pupils dig holes for the bulbs, which were planted in an area near the brook, recently renovated by the Friends of Woodcock Park and Thames Water.

The main focus of this project, however, was to support the Rotary Club’s End Polio Now campaign, by planting over 300 purple crocus corms, given to St Gregory’s Catholic Science College by the Rotary Club of Northwick Park.

As well as planting the crocuses in Woodcock Park, pupils also planted them in St Gregory’s Eco Garden.  St Gregory’s Headteacher, Andrew Prindiville, said, “We are delighted to assist the Rotary Club in raising awareness of their work to eradicate Polio across the world. We also hope that the daffodils and crocuses planted by pupils from St Gregory’s Catholic Science College and Uxendon Manor Primary School bring cheer to users of Woodcock Park next spring.”

Polio kills and paralyses young children.  There is no cure, but it can be easily prevented through immunisation. The Crocus is purple like the dye put on the fingers of children to show that they have been immunised.  Thanks to the work carried out by Rotary and its partners, Polio cases have reduced by 99.9% since 1988 and the disease is endemic in just three countries.  The aim is to eradicate this disease completely.  The Rotary Club raises money to fund immunisation programmes across the world. The purple crocus signifies this campaign. 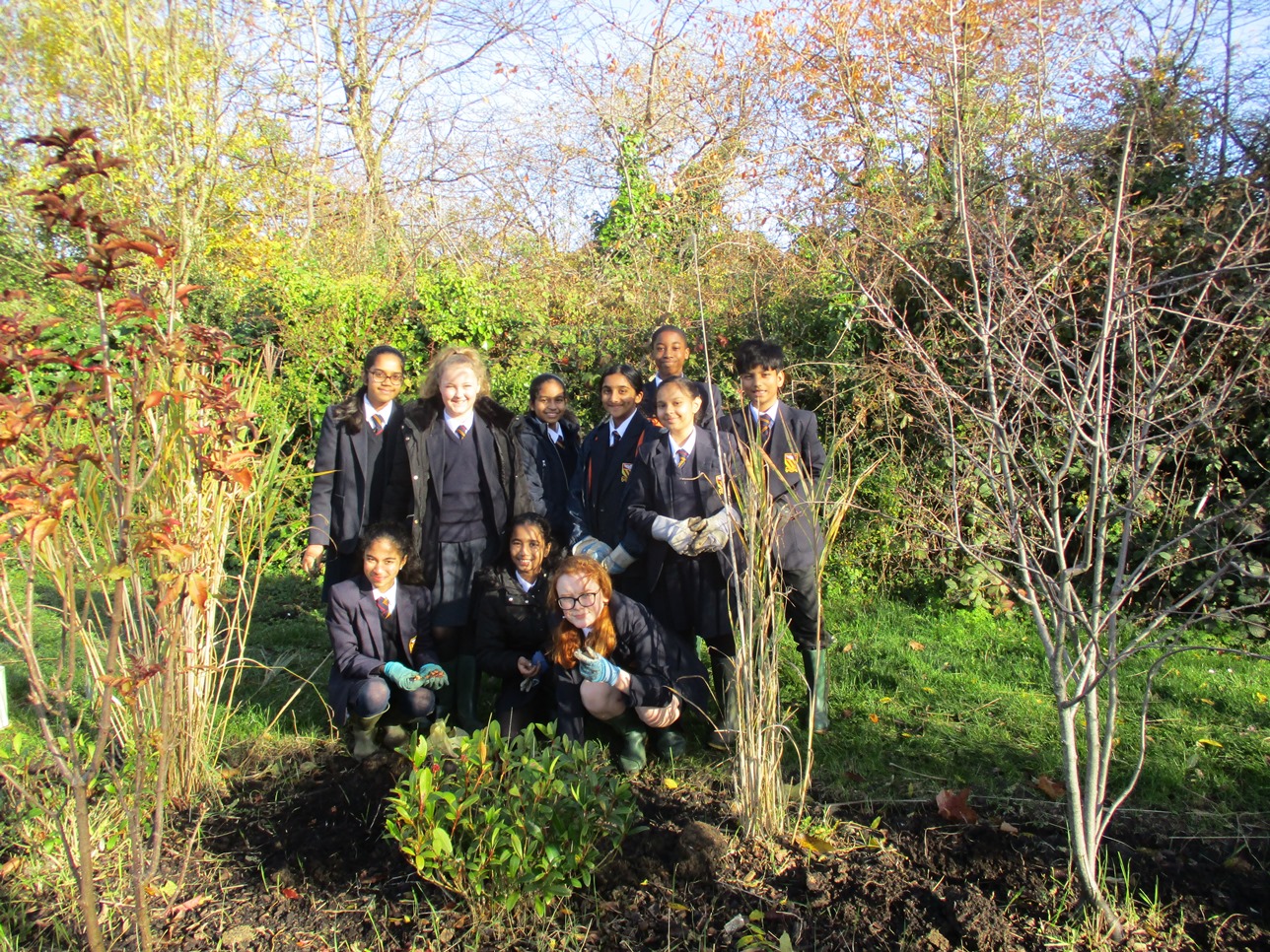 Pupils from St Gregory’s Catholic Science College in Kenton turned pumpkins, grown in the school’s eco-garden, into a hearty soup for the homeless.

The green-fingered pupils – who, earlier this year, won the Royal Horticultural Society’s School Gardening Team of the Year award - grew the pumpkins from seed during the summer term.  The pumpkins were fed and watered over the summer holidays and harvested by pupils in early October.

As part of the RHS Big Soup Share – a campaign to get school children growing and cooking edible plants - the pupils added thyme (also picked from the school eco-garden) to the pumpkins and created pumpkin and thyme soup.  The school’s cookery teacher, Damian Cullen, took the soup to Ealing Abbey Soup Kitchen, where over 150 nutritious portions were served up to the charity’s grateful customers.

Andrew Mcleay, who coordinates the volunteers for Ealing Soup Kitchen, commented, “It was really special that the soup was home-grown, homemade and served with love from those at the Soup Kitchen.”

St Gregory’s Headteacher, Andrew Prindiville, said, “I’m really proud of our pupils for sharing the fruits of their labours with those in our community who will benefit the most.” 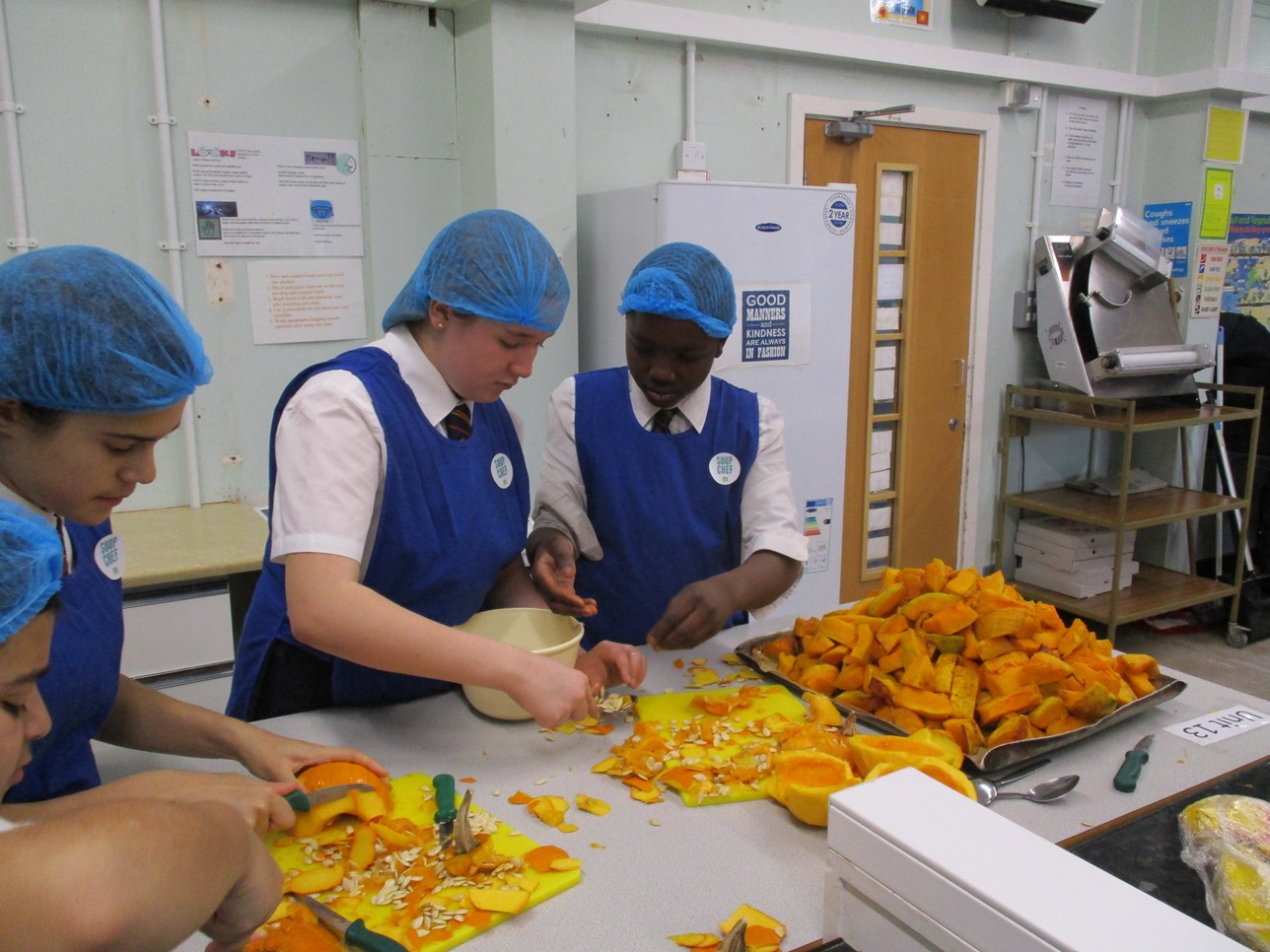 Pupils made a video of their many achievements:

To view this video in full screen, you will need to use Google Chrome.

In March 2018, pupils from 7M and the Y9 Eco Committee took part in the Young People’s Plastics Challenge, organised by Keep Britain Tidy and Brita UK, to look at ways in which they could use less single-use plastic and to develop ideas for encouraging others to do the same.   Pupils went on to present their ideas to MPs and NGOs at the Houses of Parliament.  Keep Britain Tidy made this video to showcase the work carried out by pupils:

To view this video in full screen, you will need to use Google Chrome.